Less than a month ago, Secure 1776 raised the question. Is Chicago a Hadleyville? We highlighted three recent news items which raised warning signs that Chicago was at risk. In light of the murder of Chicago Police Officer Ella French on 7 August 2021, it is worth rereading that post. Officer French was murdered, and her partner critically wounded, while they were conducting a vehicle stop. The shooting occurred in West Englewood, a Chicago neighborhood that has long-suffered the ravages of street crime and gang violence. The murder of a police officer, while she was in the act of keeping her oath to the Constitution, is a tear in the very fabric of the community.

Thomas Lemmer was the first to speak about Hadleyvilles in his 2015 article “It’s High Noon for American Policing.” A Hadleyville is a place where those wearing a badge are left to confront violence alone, without the support of the community. Officer French and her partner were attacked because they were police officers staying loyal to their oath and performing their sworn duties.

Quoting the Sun-Times Editorial: “When the police are not respected, when the authority of their uniform and badge no longer holds, nobody is safe. We either stand as a city with the police, even as we support police reforms, or we sink as a city without the police.” Secure 1776 salutes the Editorial Board for the clarity of this warning to the political power structure of Chicago.

The editorial quoted a troubling statistic from Chicago Police Superintendent David Brown. From January 1st through the attack on Officer French and her partner on August 7th, 38 police officers in Chicago have been shot at this year, and eleven have been hit by gunfire.

A key characteristic of a Hadleyville is that it is a lawless place where gunman resolve disputes and seek vengeance in open acts of violence. It is the key reason why no rational person would want to live in a Hadleyville.

Tracking summer weekend violence was one of the factors we addressed in our original Hadleyville and Chicago posting.

On this past weekend, not only did Chicago’s police officers have to deal with the murder of one of their own, they had to deal with yet another violent weekend overall. As reported by the Chicago Tribune, eleven people (including Officer French) were murdered this past weekend. There were three mass shooting incidents, and in total 78 people were shot in the city. A clear Hadleyville warning sign.

A Key Role for Elected Officials and Civic Leaders

Among the lessons to be taken from Hadleyville, is the relationship with our police officers must be one with mutual commitment. Secondly, a community’s elected officials and civic leaders must play a crucial role in strengthening the police-community relationship.

Thomas Lemmer, in the article “It’s High Noon for American Policing,” identified seven truths that local officials and civic leaders have a responsibility to publicly acknowledge. (1) Crime and victimization are not evenly distributed. (2) Police-citizen encounters overwhelmingly are peaceful exchanges. (3) Few police-citizen encounters involve a use of force. (4) When a use of force does occur, in the vast majority of cases the force used is at the low end of the use-of-force continuum. (5) Almost no one “wants” to be arrested, and when faced with the prospect of arrest, some people will attempt to flee or physically resist arrest. (6) Research shows that police officers (consistent with their training) escalate the level of force they use in response to the escalating level of resistance they face. (7) Resisting arrest is unlawful, and endangers the person to be arrested, others in the community, and the involved officers. Secure 1776 recommends reading the full High Noon article.

Elected officials and civic leaders also bear a responsibility to ensure that their police officers, who take on great personal risk, feel supported by the community and its leaders. Alderman Matt O’Shea was among the many Chicagoans who have assessed the morale among Chicago’s police officers as being “at an all-time low.” Alderman O’Shea told the Chicago Tribune: “We’re significantly down in officers. They are rushing for the exits. They are leaving law enforcement. They’re looking to get hired by suburban municipalities. They feel that leadership in Chicago does not have their back.” Clearly, a Hadleyville warning sign for the future of Chicago.

On the night of the attack, large numbers of officers had gathered at University of Chicago Hospital, where Officer French had been pronounced dead and her partner was in grave condition. Among the officers present, a lack of confidence in the city’s mayor and local officials was visible. Several grieving officers turned their backs to Chicago Mayor Lori Lighfoot, rather than listen to her speak in a hospital waiting area.

Additionally, the father of Officer French’s partner, refused the mayor permission to see his gravely wounded son. The Sun-Times reported that the officer’s father “wanted nothing to do with (Mayor) Lightfoot.” A recently retired police officer himself, witness accounts indicate that the father then gave the mayor a pointed and negative assessment of both her leadership relative to public safety and the level of violence being directed at the city’s police officers. At a Sunday morning press briefing, the mayor appeared to address this criticism. She remarked: “the police are not our enemies.”

At a Monday news conference, Superintendent Brown reported on the criminal charges placed on two brothers in the murder of Officer French. However, the Superintendent also further acknowledged the frustrations of the city’s police officers. Quoting from the Sun-Times:

“They feel alone, they feel unsupported they feel like no one appreciates the work they do. They’re human so they have a lot of expressions of discouragement, and I would just ask the people of Chicago to support their police officers with kind words of support.”

Secure 1776 mourns the loss of Officer French, and the more than 25,000 officers whose lives have been lost and taken in faithful service to their communities across America. Every remembrance of Officer French describes a caring person and an officer dedicated to her chosen profession. Officer French gave the last full measure of devotion to help prevent Chicago from becoming a Hadleyville.

We at Secure 1776 are humbled by the loss of Officer Ella French, and we thank her for her service. Her murder is an outrage – and a warning for a city. As a community, Chicago must truly honor her sacrifice and that of her family. As a community, Chicago must demand justice and hold those responsible for her death accountable. Chicago’s elected officials, civic leaders, and the community-at-large need to ensure that the city’s police officers feel their support.

While Alderman O’Shea was critical of the level of support police officers have felt from city leaders, he believed there is significant community support. Quoting the alderman: “The majority of people in this city support the police, want to see something done to send this pendulum back the other way. They’re sick and tired of the violence. Sick and tired of innocent children being murdered.” A strengthened police-community relationship, and improved support from the city’s leaders will be essential to swing the pendulum back. As a city, Chicago must stand against lawlessness.

Learn and See More Below

“In the News” Hot Topic Categories

The way forward must be a proactive one.

“The way forward must be one with broad outreach across community partners. As a community, we need our elected and civic leaders to foster unifying approaches that advance constitutional policing, reduce violence, address chronic crime conditions, improve public safety, protect victims, foster wellness, and enhance community support for the police. Those seeking and participating in police reform efforts must not lose sight of these core elements. As a profession, it is essential that we fully reawaken our community policing roots, and engage in active problem-solving directly with all community residents and stakeholders. Policing must honestly seek to reach the hearts and minds of the community and call them to action. If we seek to regain the support necessary for our police departments to meet their public safety mission – the voices of support for the police must be heard from across the community of us.” 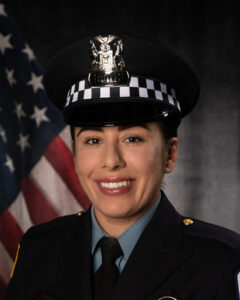