On Sunday morning, 7 August 2022, Chicago Police Department (CPD) Star 15013 was formally retired in an emotional ceremony. It was the star worn by Police Officer Ella Grace French. I never had the privilege to properly meet Officer French. But one year ago, in the very early morning hours of 8 August 2021, I was privileged to stand among the couple of hundred CPD members, who met her, as she arrived at the Cook County Medical Examiner’s Office.

We were there because on the evening of 7 August 2021, Ella’s tour of duty came to a tragic end. We were there to honor her. To mourn her passing. It was there, for the first time, that I also came to be in the presence of Ella’s mother, Elizabeth French. There were heartbreaking images and sounds that will remain always. But there were also powerful and enduring images of love, courage, and strength.

Loss and the Honored

Chicago’s officers have joined with officers from across America in honoring all of the police officers lost in the line of duty over this past year. Just as the law enforcement community from across the country has joined with Chicago’s officers in honoring Officer French. Among the honors rendered for a fallen Chicago police officer, is the retirement of that officer’s police star. The CPD’s directive on awards and honors identifies an “Honored Police Star” as follows: 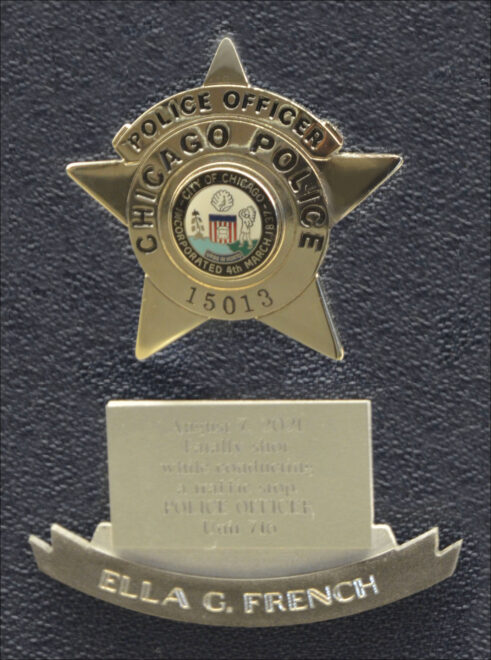 “An award of honor conferred upon the star of any deceased sworn member who met death while in the performance of duty, under circumstances that clearly demonstrate courage and dedication in the face of great danger, without regard for personal safety. This is awarded as a tribute to the member’s courage and dedication. This award is approved by the Superintendent.”

At the request of Elizabeth French, the CPD assembled at headquarters on a Sunday to preform this honor’s ceremony for her daughter’s star. A mother, family, friends, partners, and a department gathered specifically on 7 August 2022 to honor all that came before 7 August 2021. Ella Grace French was remembered and acknowledged as a person, a daughter, a sister, a friend, and a honorable police officer.

A governor and a mayor were properly in attendance. They spoke appropriately to the solemnity of the occasion. They honored a mother’s wishes and spoke not of how her daughter died, nor about those responsible for why a mother has already been twelve months without her daughter. Those assembled, listened quietly to their spoken words.

Superintendent David Brown spoke as well. He said in part: “We honor the life Officer French lived, and lift up the lives she touched. We celebrate the impact she made in her district, in our Department, and across this city. We remember Ella and all that made her a friend to everyone she met. Her partners and the team she worked with have talked about that energetic personality and electric smile. And her friends described her as bold and independent, and a loyal and kind soul who loved animals and meeting people. But make no mistake about it, Ella was a cop’s cop.” Again those assembled listened quietly.

Then Officer Joshua Blas spoke. He was Ella French’s regular partner. He was there that night that Ella was taken and Officer Carlos Yanez, Jr. was catastrophically injured. Officer Blas spoke about none of that, nor of his own heroic actions that night last year. He spoke about ice cream. The time working together. Their shared hopes of one day becoming detectives. He spoke about Ella. Officer Blas said all that he needed to say with honest emotion. He spoke truth. He told us all, “I miss my partner.” When he finished speaking, those assembled applauded the honest truth spoken by a police officer in honor of his partner.

Sadly, I have been at other Honored Star Ceremonies. Words are spoken in honor of the fallen. The family of the fallen receive their loved one’s star from the superintendent. Then they are called upon to place the star into the display case. It is always an emotional moment. It is one where those assembled quietly bear witness. Elizabeth French would perform this sacred role. But, first she joined Officer Blas at the podium to speak. 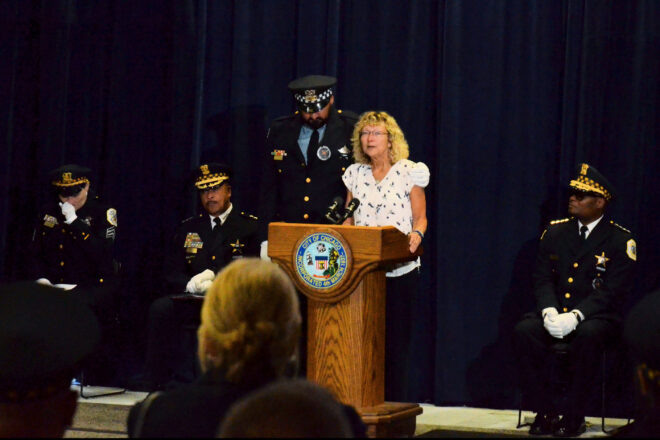 As Elizabeth French spoke, Officer Blas provided support and comfort to his partner’s mother. It is an image of compassion, and the continued dedication of a partner. Grace is defined as “elegance or beauty of form, manner, motion, or action.” In the words and actions of Elizabeth French, the presence of grace is remarkable. A mother proud of her daughter, Ella Grace. Ms. French spoke about the plaques and awards that are a symbol of Ella the police officer. But, she spoke with love and sorrow about: “My baby girl. There are days I miss her so much it hurts.”

Elizabeth French raised an amazing daughter, who she taught much. Ella Grace learned those lessons and treated others with respect. She performed her duties as a police officer with skill and grace. Grace she clearly learned from her mother. A mother, who in the midst and aftermath of immense personal tragedy, continues to express deep, loving, gratitude. We have much to learn from both Ella and Elizabeth French.

As Elizabeth French spoke, those assembled listened intently, awed by the strength and sincerity. When she finished, she received a standing ovation. The applause were more than an expression of respect. They were an expression of appreciation for the warmth and concern of a mother. 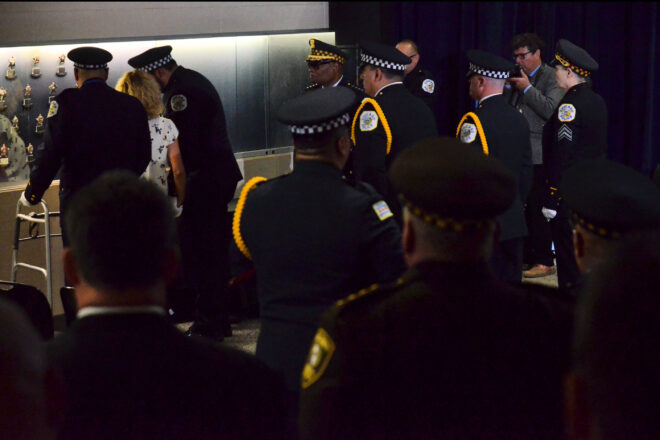 Consistent with the protocol, Superintendent Brown presented the star worn by Officer Ella Grace French to her mother. Then, at 11:02 am, CPD Star 15013 was placed inside the Honored Star Case by Elizabeth French. Assisting her were Officers Joshua Blas and Carlos Yanez, Jr.

With a closing prayer from Fr. Daniel Brandt, the CPD’s lead chaplain, the ceremony concluded. Officer Blas and a member of the Chicago Police Honor Guard escorted Ms. French and her family to a nearby reception area. There Elizabeth French received support – and offered support to family, friends and Ella’s fellow officers. 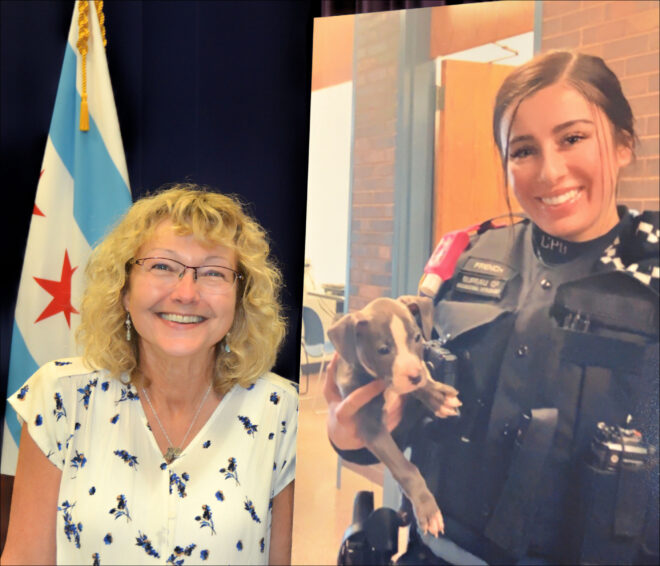 Elizabeth French poses beside a photo of her daughter, Ella Grace French. [Photo by Thomas Lemmer, Click to enlarge image]

There were smiles, some tears, and more remembrances. Hugs and well wishes. There were photos of togetherness. Healing expressions of kindness and warmth. When asked if she would mind taking a photo alongside one of her favorite photos of Ella, there was a deep smile. A mom, along side her little girl holding a rescued puppy. There was love.

I am forever grateful for Ella’s service. I am also grateful to her mother. Elizabeth French guided Ella into the woman who willingly took on the challenge of being a police officer. Police Officer Ella Grace French did what was asked of her, and more. As Ella Grace, a little girl, she had a tremendous role model. Thank you, Ella Grace French. You are loved and remembered. Thank you Elizabeth French. We must take to heart the lesson of gratitude before us, as we continue to pray for God’s loving embrace upon all of the fallen and their families. Truly, “blessed are the peacemakers, for they will be called the children of God” (Matthew 5:9).

Consistent with the example of gratitude demonstrated by Elizabeth French, I close with the following acknowledgements. The Chicago Police Department performed well on Sunday. I salute the Superintendent, command staff, officers, and other members of the police family in attendance. I want to extend a special “well done” and thank you to the Awards and Recognition Section, Honor Guard, Special Activities Section, Chaplain’s Unit, Graphic Arts Section, and Professional Counseling Unit, as well as the facilities management team. Your efforts ensured the intended honors for a fallen hero, her mother, and their family were conveyed with dignity, respect, and heartfelt sincerity.

Always remember Ella Grace French, her mother, and her family.

If you are not currently receiving subscriber email notifications, subscribe now.

Learn and See More Below

“In the News” Hot Topic Categories

The way forward must be a proactive one.

“The way forward must be one with broad outreach across community partners. As a community, we need our elected and civic leaders to foster unifying approaches that advance constitutional policing, reduce violence, address chronic crime conditions, improve public safety, protect victims, foster wellness, and enhance community support for the police. Those seeking and participating in police reform efforts must not lose sight of these core elements. As a profession, it is essential that we fully reawaken our community policing roots, and engage in active problem-solving directly with all community residents and stakeholders. Policing must honestly seek to reach the hearts and minds of the community and call them to action. If we seek to regain the support necessary for our police departments to meet their public safety mission – the voices of support for the police must be heard from across the community of us.”